1. Boyana Church is a medieval Bulgarian Orthodox church located at the outskirts of Sofia. A total of 89 scenes with 240 human images are depicted on the walls of the church. Today the name “Boyana Master” stands for the team of unknown artists who decorated the church. Boyana church is the only and the most impressive wholly preserved monument of the Turnovo School of Painting from the 13th century. According to the experts, the world famous frescoes in the Boyana Church played an important role in the development of mediaeval Bulgarian and European painting.

2. Rila Monastery is situated in the southwestern Rila Mounstains, 117 km south of the capital Sofia in the deep valley of Rilska River at an elevation of 1 147 m above sea level. The monastery is named after its founder, the hermit Ivan of Rila. Founded in the 10th century, the Rila Monastery is regarded as of Bulgaria’s most important cultural, historical and architectural monuments. It’s a key tourist attraction for both Bulgaria and Southern Europe. The whole complex occupies an area of 8 800 sq.m.

3. Thracian Tomb of Kazanlak is situated near the ancient Thracian capital of Seuthopolis in a region where more than a thousand tombs of kings and member of the Thracian aristocracy can be found. The Thracian Tomb of Kazanlak is part of a large Thracian necropolis. It comprises a narrow corridor and a round burial chamber, both decorated with murals representing a Thracian couple at a ritual funeral feast. The monument dates back to the 4th century B.C. The paintings are Bulgaria’s best-preserved artistic masterpieces from the Hellenistic period. 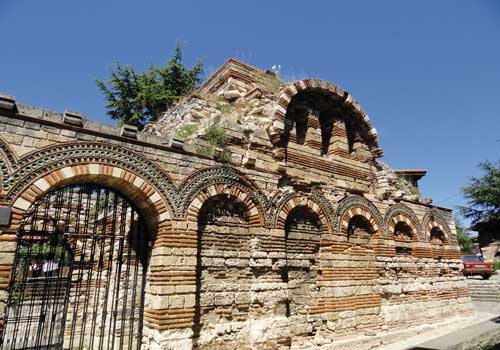 4. Ancient City of Nessebar – Nessebar has on several occasions found itself on the frontier of the threatened empire. The ancient part of the town is situated on a peninsula (previously established as an island) connected to the mainland by a narrow man-made isthmus. It bears evidence of occupation by a variety of different civilizations over the course of its existence.

5. Madara Rider (also known as Madara Horseman) is an early medieval large rock relief carved on the Madara Plateau, east of Shumen in northeastern Bulgaria. The monument is dated in the very late 7th or more often very early 8th century, during the reign of Bulgar Khan Tervel. The relief depicts a majestic horseman 23 m above ground level in an almost vertical 100 m high cliff.