1. Koprivshtitsa is a historic town in central Bulgaria, in Sofia Province, lying on the Topolnitsa River among the Sredna Gora Mountains. This is one of the characteristic Bulgarian towns, still preserving the atmosphere of the Bulgarian National Revival period of the 19th century. Koprivshtitsa boasts a large number of architectural monuments, 383 in total, most of which have been restored to their original appearance. Collections of ethnographical treasures, old weapons, national costumes, National Revival works of art, household weaves, embroidery and typical Bulgarian jewelry has also been preserved.

2. Bozhentsi is a village and architectural reserve in the middle part of Balkan Mountains, 15 km east from Gabrovo and north from the Shipka Pass. Bozhentsi was established after the incursion of the Ottoman Turks in Veliko Tarnovo, the former capital of the Second Bulgarian Kingdom, in the 16th century. The village gradually grew to become an important trade junction during the National Revival towards the middle of the 18th century. The main production consisted of leather, wool, beeswax and honey. Characteristic features of the Bozhentsi architecture are the verandas, the stone-plate roofs, the fireplaces in the corner and the ceilings with woodcarvings. The pavement of the streets in the village is only cobblestone.

3. The Architectural And Ethnographic Complex Etar is situated at a distance of 9 km from Gabrovo. There are regular bus lines available from the town for facilitation of the visitors. The open-air museum was established in 1964. The purpose of which is to present the architecture and the style of life in Gabrovo and the region during the second half of the 18th century and the beginning of the 19th century. The museum contains 50 sites – houses with craft workshops, water installations and other buildings. The only collection in Bulgaria of technical installations driven by water – filling mills, water mills, grindstones, etc., are situated there. 16 houses can be seen on the crafts bazaar (the central commercial street) in the Etar, which are exact copies of buildings existing in the past in Gabrovo and the region. Multiple crafts are presented – bell-making (manufacturing of wrought bells for animals), pottery-making, sugar-making (manufacturing of sugar articles), furriery, manufacturing of copper vessels, etc. Besides observing the authentic technology which the craftsmen are using, the visitors can purchase the articles made in front of their eyes.

4. Melnik is a town in Blagoevgrad Province, in the southwestern parts of Pirin Mountains, about 440 m above the sea level. The town is and architectural reserve and 96 of its buildings are cultural monuments. With a population of 385 people, it is the smallest town in Bulgaria, retaining its city status today for historical reasons. Interesting architectural landmarks include the Byzantine House, one of the oldest civilian building on the Balkans (built probably in the 12th or 13th century as a Bulgarian fortress); the Kordopulou’s House (named after the merchant Manolis Kordopulou to whom it once belonged), which also has one of the largest wine cellars in Melnik; the Pashov House (1815), which hosts the Historical Museum of Melnik; the Pasha’s Housem built by Ibrahim Bey, one of the richest beys in the region during the Ottoman rule. The town has also been famous for producing a strong wine variety since 1346.

5. The Zlatograd Ethnographis Areal Complex is situated in the heart of the town Zlatograd, in southwestern part of the Rhodope Mountains. The open-air museum is also part of the everyday life of the locals. The complex comprises an ethnographic museum, workshops and an exhibition of water equipment. The museum consists of an archaeological collection, an exhibition about the occupations of the local people in the past, costume collections, adornments and ritual items. Original costumes from all parts of Bulgaria are sold there. The tour continues with a visit to the workshops. All of them are functioning and the visitors can watch how the skilled masters craft different objects offered for sale there. 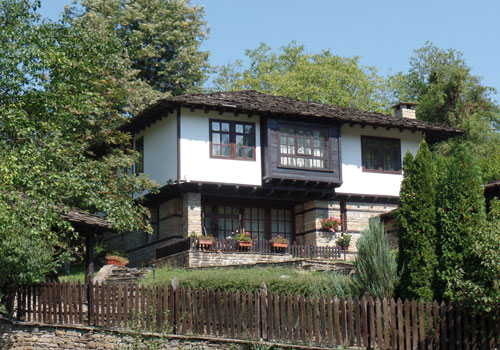